Bapaji’s most valued quality (and one I have many memories of) was generosity. He believed in charity, in helping humanity—not for recognition but simply to make the world a better place. And he practiced what he preached.

In 1943, the Bengal Province was hit by a tidal wave, which resulted in a crippling famine. The price of rice skyrocketed four-fold, and three million people starved to death. The poorest Bengalis, who had no money and no land (or their land had been flooded) were the most at risk. Ration cards were a part of everyday life in India and given for a weekly quota of staples, rice and wheat, to be purchased at a government grain shop. (If you were rich, you could buy more on the black market.) 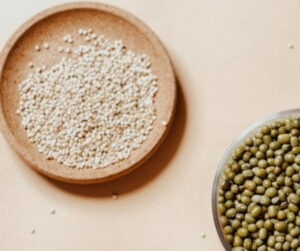 We did not have big eaters in our family, because we had always been taught to eat a balanced diet and not to overindulge our appetite. Even though we had no gyms or health clubs, we were all a healthy weight, and we could live well under our ration quota.

So, Bapaji decided that the whole family should sacrifice its share of rice and grain once a week and send it to those truly in need in the Bengal Province.

We substituted these meals with lentils, vegetables, and fruit. I remember being so proud that I could help others in such a real and important way. (Of course, Bapaji took his contribution one step further and donated his share of rice and wheat from a meal every day, substituting his lunches with yogurt and fruit.)

Bapaji’s generous spirit was not limited to extreme circumstances, though; he regularly shared in whatever way he could.

On Sundays a handful of eight- to ten-year-old’s from the nearby orphanages would knock on our door, asking for donations of wheat, rice, sugar, and lentils. Bapaji would open the door with a smile on his face and tell us to go to the pantry and fill a bowl for each one of their bags.

The distance between the front door and the pantry was about twenty-five feet, and sometimes we would drag our way across it, even though we knew the orphans were anxiously waiting for their food. Bapaji, seeing our laziness, would share with us another one of his favorite sayings, “Jab tak Deh hai to De; Jab Deh na hogi to kaon kahega de?” Deh and de are closely related words with different meanings. Deh means “to be alive,” while de means “to give.” Bapaji was telling us:

“You can give only when you are alive and around; once you are not around, who will ask you to give?”

These were more just lessons, Bapaji’s teachings were part of our every day upbringing. His example shaped our childhood and stayed with us forever.

From a young age, Dr. Sadhna Bhatia knew she wanted to be a doctor. Supported by Grandfather Bapaji and her family, she pursued a medical career in the United States after graduating from the prestigious Lady Hardinge Medical College in New Delhi, India.
All Posts »
PrevPreviousHarvard Medical School Brigham and Women Hospital Residency Anniversary
NextA Boston Spring and Learning from FailureNext